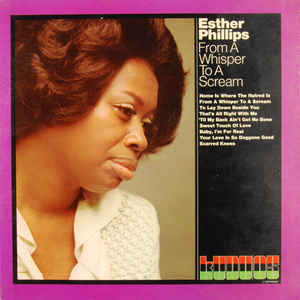 Had Little Esther been born in the 1920s instead of the 1930s, I feel sure she would have become as widely admired as that other ...

LELAN ROGERS first sprang to prominence as the man who brought national success to Esther Phillips with 'Release Me'. In the decade that has passed, ...

A MORE apt title could surely not have been found for the initial Kudu set by Miss Esther Phillips. From A Whisper To A Scream ...

IT'S ALWAYS a very gratifying and rewarding experience to see an artist in whom you have particular faith and in who you strongly believe, finally ...

Esther Phillips: The Time Is Now

CERTAINLY one of the most gratifying experiences is to see an artiste you've admired over a period of years finally get that long overdue recognition ...

ESTHER PHILLIPS doesn't get too knocked out when she scores with a hit single. ...

MS. PHILLIPS feels that new doors have opened up for her since 'Day'. She deeply regrets the cancellation of her Euro tour but looks forward ...

ESTHER PHILLIPS died on 7 August. I read this somewhere in the small print of a national newspaper. "LOS ANGELES – Blues and jazz singer ...

OF ALL the blues-shouting earth mamas who dominated the distaff side of R&B in the early '50s, easily the most disarming was Little Esther, born ...

Pee Wee Ellis' work with Esther Phillips: A tale of the tape

PEE WEE ELLIS, best known for his groundbreaking work with James Brown, had worked as Esther Phillips' bandleader back in the 1970s. In an interview ...