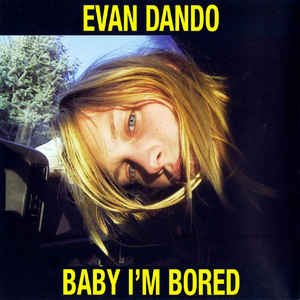 SINKING INTO the bar-room sofa of one of Kensington's more sterile, demi-swank hotels on the morning after America re-bombed Baghdad, Evan Dando smiles with a ...

Evan Dando and the Pop Walkabout

GAY HEAD — It's nearing summer's end on Martha's Vineyard, and Evan Dando, the 29-year-old guiding voice and vision of the Lemonheads, is chilling on ...

Evan Dando: The Smoker You Drink, The Player You Get

DRIVING THROUGH the sheeting rain from the miniature airport that serves Martha’s Vineyard, the guy at the wheel informs me that we’re heading towards the ...

I HAVE REASON to believe that Evan Dando has been drinking. It's not so much his appearance – grimy T-shirt, flared polyester trousers crudely cut ...

A Lemonhead's Personal History of Song ...

A DECADE AGO, Evan Dando was pretty much the perfect pop star. He was a tousle-haired, scatterbrained blond who posed for teen magazines with his ...

AS FRONTMAN OF the Lemonheads, Evan Dando displayed several striking talents: Writing deceptively plain songs that slipped beneath your skin and often concealed a profound ...

FEW ROCK'N'ROLLERS have crashed from such a spectacular height as Evan Dando. Fewer still live to tell the tale. In 1992, he was primed to ...

The mighty Lemonhead gets seven-year-itch and returns a much-changed man. ...

Evan Dando: 'I Can't Completely Let Go Of Drugs – And I Don't Want To'

He was the golden boy of grunge, and then he threw it all away. Evan Dando tells Mat Snow why he wants to make a ...

Evan Dando: Keep Off The Grass

...unless you're Evan Dando, in which case the sex/drugs/rock & roll cocktail appears to be your ticket to eternal youth. He's done Bad Things, he ...

MOST OF the world thinks that, by rights, Evan Dando shouldn't be alive. But like Iggy Pop (one of his mentors), he's a misunderstood boy ...

LEMONHEADS CO-FOUNDER Evan Dando puts his pioneering alternative rock band back together like clockwork every decade. ...