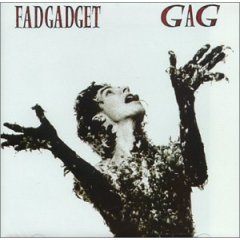 Paul Morley encounters Frank Tovey on the verge of failure, and Fad Gadget on the point of hysteria. So why is this a succesful combination? ...

SEEDY CITY, sleazy films... creeping up a back staircase by the stage door of Paul Raymond's Windmill Theatre... tiptoeing up more stairs past stacks of ...

By day he's mild-mannered Frank Tovey. But at night he dons disguise and becomes the fearsome Fad Gadget. Fred Dellar talks to both. ...

SOME OF the many moods of Mute were on show tonight. Label mates Depeche Mode and Fad Gadget would appear to be polar opposites, but ...

NOW THAT Martial Law has been declared in rock by such jail guitar banner-waving bores as U2, Big Country and The Alarm, Fad Gadget’s appropriation ...

No longer Fad Gadget, his sights firmly focused on Saturday Superstore, FRANK TOVEY tells a skeptical Simon Reynolds that he’s out to corrupt the youth ...