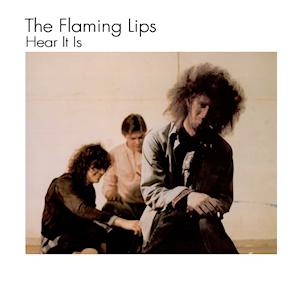 The Flaming Lips frontperson on the new reissues; looking back on the old albums, liking what he hears; amateurism, and "will over skill"; keep changing and not being precious; Jonathan Donahue and producer Dave Fridman bringing musicality to the band; using his imagination, and writing about UFOs; sampling the Beatles; the meaning of the Jesus Egg, and being about to back Beck.

On the release of At War With The Mystics, Mr. Coyne waxes philosophical about rock'n'roll, life, drink, drugs, death and the entire meaning of it all.

The Flaming Lips: Transmissions From the Satellite Heart

WHEN THE FLAMING Lips look out at the world from Oklahoma, it must seem hurried and strange. They don't let it affect them. Transmissions ...

YOU MIGHT regard the hirsute scruffball demeanour as proof of their berth on the now ritually condemned HMS Slacker, but in fact The Flaming Lips ...

THE FLAMING LIPS are to rock what René Higuita is to goalkeeping. EVERETT TRUE salutes the band who arrive at obvious pop songs via the ...

Twelve years and seven albums down the line and only now are Oklahomans THE FLAMING LIPS making their presence felt. At last we can let ...

IN THE REALM OF musicological discourse, the term 'genius' has been overused virtually to the point of obsoletion. So it bears stating at the outset ...

Wayne Coyne on The Soft Bulletin

I AM NOT On Drugs...yet. I sometimes think about how quiet the world must have been, maybe a hundred years ago. I say that, having ...

YES, THE FLAMING LIPS. When they appeared in the mid '80s, 'Jesus Shootin' Heroin' got college radio time from fans of Butthole Surfers psychedelic stomps, ...

"PSYCHEDELIA" has undergone some curious convolutions since its Haight-Ashbury heyday. For the most part, though, the hallucinogens have gone, leaving a purely musical residue - ...

The Flaming Lips: The Soft Parade

THE FLAMING LIPS have just made a contender for Last Great Album Of The 20th Century. But are they really a bunch of nutters on ...

NAMED AFTER a legendary 1976 EP by Sonic’s Rendezvous Band, the German label City Slang has been home to some of the best and most ...

The Band That Fell to Earth: The Flaming Lips' Christmas on Mars

WAYNE COYNE'S creative mission for the evening is to get the pants off his manager's young intern. ...

The Flaming Lips: We Mean You No Harm

Inhabitants of planet Oklahoma, for 15 years The Flaming Lips happily explored the outer limits of symphonic psych. Then, with 1999's The Soft Bulletin, they ...

BACK IN February 1999, Wayne Coyne wrote of the soon-to-be-released The Soft Bulletin that, "in a strange reversal of musical universes, the more indulgent and ...

The Flaming Lips: Finally The Punk Rockers Are Taking Acid 1983-88

FOLLOWING THESE fearless alterna-rockers on their path from '80s weird to pop bliss, few would have thought in the late '80s that the Flaming Lips, ...

King Coyne Meets The Chemicals Uptown: A Summit Meeting with the Lips and the Chems

SOMEHOW IT WAS inevitable that the Chemical Brothers – those High Priests of the rock/dance interface – would one day work with Oklahoma City's Finest. ...

OLD FAN OR NEW, it's a live show that blows your mind. Gaily-coloured balloons the size of space-hoppers assault and caress you from every direction. ...

The Flaming Lips: What's Next

Profile and Interview by Jaan Uhelszki, Harp, May 2005

THE FLAMING Lips have begun recording the follow-up to 2002’s Yoshimi Battles the Pink Robots, provisionally titled At War With the Mystics, with Dave Fridmann ...

The Flaming Lips: Bearers of the Psych Torch

Interview by Jaan Uhelszki, Harp, May 2005

"WHAT'S THE greatest misconception about me?" the Flaming Lips' Wayne Coyne ponders aloud, pushing up the sleeves of his putty-colored suit. ...

The Flaming Lips: At War with the Mystics

THERE WAS SOMETHING so ultimate about the Flaming Lips' The Soft Bulletin, emphasized by its release in the last year of the 20th Century, you ...

Interview by Jaan Uhelszki, Harp, May 2006

Steven Drozd of The Flaming Lips

STEVEN DROZD, guitarist for The Flaming Lips, plays guitar, keyboards, drums, sings, writes, entertains and philosophizes. He does a lot of different things. And that's ...

"WITH THIS ALBUM," Wayne Coyne revealed to Uncut last year, "I wanted to tell people that I know life is beautiful because I've seen how ...

THINGS HAVE CHANGED monumentally for the Flaming Lips over the course of their 23-year career. "We were just dorks who liked music," says sonic ringmaster ...

Report and Interview by Tom Doyle, Sound on Sound, March 2010

Following their unlikely breakthrough into the mainstream, Flaming Lips made a conscious return to the outer limits with their recent album Embryonic. Dave Fridmann manned the controls. ...

FEW THINGS ARE certain in life, but this is: At some point Wednesday during the Flaming Lips concert at Bank of America Pavilion, singer Wayne ...

He sang of giraffes and jelly while wreaking freaky panto mayhem. But at 52 has reality bitten the Flaming Lips' ringmaster? "This is the first ...