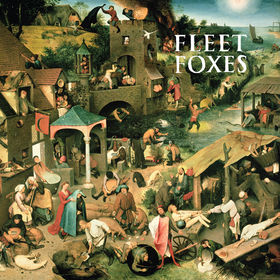 THOUGH NOT having quite the sun-kissed enchantment of their debut Sun Giant EP, Seattle alt.folk combo Fleet Foxes' full debut suggests they can follow the ...

Why Is Our Radical Folk Heritage Ignored?

Modern British music is so in thrall to Americana that our own treasure trove of radical traditional folk is in danger of being forgotten ...

WITH HELPLESSNESS Blues, Fleet Foxes triumphantly deliver on the promise of their popular debut, the album that helped establish folk-rock once again as a formidable ...

Fleet Foxes dust down their antique marxophones and twanging one-string zithers — and record it all on tape. ...

Fleet Foxes return, warmer and more bracing, with a set of vivid utopian folk songs for an age of modern austerity ...

How Fleet Foxes are handling high expectations second time around

Profile and Interview by Laura Barton, The Guardian, 16 June 2011

Huge success began a steep learning curve for the Seattle band. Bandleader Robin Pecknold explains how the second album put the band in a "dark ...

In The Mood: The Favourite Albums Of Rush's Geddy Lee

Mick Middles speaks to Rush bassist and singer Geddy Lee about his favourite albums of all times... and finds surprises amidst the classic of the ...