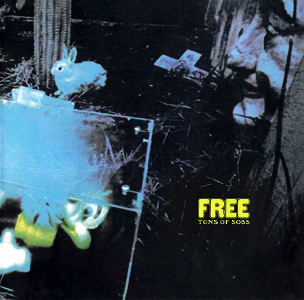 CURRENTLY ATTEMPTING the almost impossible task of filling Freddie Mercury's shoes in a new-look Queen, it's hard to imagine Paul Rodgers landing any further from ...

The British Blues-rock bass wunderkind talks about joining John Mayall at 15, then of his years with the fabulous Free, including the writing of the iconic 'All Right Now', and Paul Kossoff's descent into drugs.

...IS A REASONABLY good programme by Free, a group often dismissed as "just another blues band." ...

THEY MAY be new to the charts, crashing in at No. 18 with 'Alright Now', but Free are by no means newcomers on the scene. ...

A band who are slightly embarrassed by that long-awaited hit ...

Free: Free For All

A front row view of how Swindon got FREED ...

FAIRFIELD Hall, Croydon, has seen some amazing scenes since it became South London's home of rock, but I doubt whether the old faithfuls at the ...

Free Are All Right Now

HARD, THUMPING rock. That's what is coming out of England these days, and if it's a trend that can't very well last too long, at ...

ONE OF THE criticisms levelled at Free since their final acceptance earlier this year is that many of their songs sound very much alike. With ...

Free have never felt so close before Paul and Andy talk to Roy Carr about the new album ...

A HUNDRED or so enegetic dancers had surrounded the stage by the end of Free's concert at Croydon's Fairfield Hall on Saturday but I don't ...

THE AUDIENCE WENT mad from the moment Free were introduced on Thursday at the Albert Hall. Nearly every number was greeted warmly with hoops and ...

Free: Free For All (Island)

Free fall through being too complacent ...

RESURRECTED FROM what seemed a permanent split, Free is making a second bid at capturing the American public's heart. ...

ELP Plus Tull in Dirty Raincoats, and How Free May Drop the Name

WATCHING EMERSON, LAKE and Palmer play a concert with Free in the middle of a raging typhoon in Tokyo with Carl Palmer performing an incredible ...

FREE IS AN ENGLISH quartet that toured with Blind Faith, had a big hit single, was hailed by the British press as the new Rolling ...

ERIC FALCON, local guppy for a major Memphis underground music radio station, claims that Free is the most exciting group around. He feels that a ...

THE SOUND OF Traffic's first album reverberates against barren, functional walls as gray as the overcast L.A. day outside. ...

Andy Fraser: Out Of It

A rainy night in Shrewsbury was to alter the course of Andy Fraser's life. For it was there in 1970 that he first hummed the ...

THIS INTERVIEW coincided with Paul Rodgers' 1997 album, Now, his first set of original material since Cut Loose in 1983. It was conducted in a ...

Free: The Harder They Come

Retrospective and Interview by Phil Sutcliffe, MOJO, May 1998

They were young. They were feral. They played unfeasibly good rock music. And they hit the road hard. It could only end in heartbreak. Phil ...

Well-presented 5-CD box. Three career-spanning discs of album outtakes, alternative mixes and remixes, one of live material and one of assorted Free side-projects. ...

The Ballad of Free

Thirty years after drugs killed Free's guitarist, the band are back in vogue. They just won't talk to each other. ...

'ALL RIGHT NOW' is one of the quintessential cock-rockers – a cruder, more pub-rockish 'Whole Lotta Love'. It's the sound of the longhaired male predator ...

ANDY JOHNS lived rock'n'roll, whether that meant delicately dangling microphones over a banister at country house studio Headley Grange to get the sound of John ...