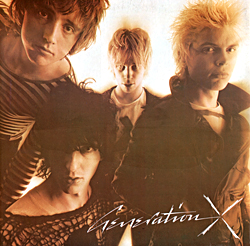 ROCK ON Indeed.I've finally figured out, after all this time, why, despite the fact that lots of people whose opinions I respect hate them, I ...

The Generation X frontman talks about the evolution and nature of the band, and extemporises about the nature of punk rock and the power of rock'n'roll.

WITH SIOUXSIE and the Banshees not playing because "they couldn't get it together" and the remaining support act, Eater, being a band that I wouldn't ...

Generation X: The Band of the Book

IT BEGAN with a street whisper. ...

I CAME to see Generation X and to look for prospective musicians as I had been assured that the floor was knee deep in 'em ...

THE QUEUE outside looked promising. Over two months since Gen-X had played a London date (barring the infamous Noreik fiasco). As soon as you forced ...

Generation X: We're Not Into The Mindless Drone

GENERATION X are half way through their soundcheck, and there's a "what shall we play next?" lull in the proceedings. ...

Generation X Put The Boot In

YOU KNOW THAT immense sense of relief that hits you when you get through the one album in every twenty or so that you might ...

This Canadian Geyser Come to London and Saw Generation X

"YOUTH, YOUTH, YOUTH". I heard that chorus on a tape just once and spent the whole week mentally playing it over and over. Then I ...

Bowie and Bolan Get It On

"OH THAT'S REALLY Polaroid! You've gotta keep the ending!" David Bowie rocked with laughter and Marc Bolan wiped away the tears that had threatened to ...

The Clash, Generation X: Only in ZigZag! The New Clash Single!

Generation X, The Saints, The Lurkers, The Valves: The Roundhouse, London

THE FIRST TIME I encountered Generation X (or at least their lead singer/figurehead Billy Idol) it left an unpleasant taste in my mouth. ...

"MY AGE group is relearning rock 'n' roll, trying to find the essence of it. We're struggling to learn." ...

GENERATION X ARE pissed. Legless. Tony James is sprawled in a dressing room armchair, cradling his bass with a glazed-silly grin spread across the face ...

ON PAPER Generation X have their credentials for being The Now Sensation all present and correct. They've had them for a long time too. ...

"MY FRIEND was bawling her eyes out. She asked Billy to kiss her and he did. She just about fainted!" ...

FROM THE VERY start of their recording career, it was obvious that Generation X had some rather unparochial ideas about their role as a punk ...

LONDON — ANYONE WHO calls Elton John a "bald cunt" is risking the wrath of the rock & roll mainstream, but Billy Idol of Generation ...

Generation X: Idol of the Generation

Why Generation X Are The Best Group In The World

KEEP THE Sex Pistols (someone is going to have to now), keep The Clash and someone take The Stranglers, please. I've got a group on ...

ALL THE girls love blond Billy Idol (he pouts like Brando), and Generation X seem to have the right attitude. "No Session Musicians" it says ...

Generation X: All The Young Dudes

GLEAN WHAT you will from the shapes of things that came to pass during 1978, but one commodity that was rejected with an almighty vengeance ...

Just A Pretty Buncha Posers? Or is there more to Generation X?

MOST BANDS would waste no time in setting the dogs on you if you dared call them posers. Generation X, on the other hand, have ...

MEDALS FOR bravery should be struck for Billy Idol and his mates in Generation X. Would you, dear reader, like to stand on a stage, ...

MOST NEW-WAVE bands decry the jet-set life styles of established rock stars, but it's a safe bet to assume many were attracted to rock by ...

THIS, GEN X's second outing, is not very good compared to their first, but it does serve a useful function by pointing out two phenomena ...

TO PUT EVERYTHING INTO PERSPECTIVE, AS TO WHERE THE ORIGINALS FROM '76 HAVE GONE; BE IT A WAYSIDE DITCH OR A MAJOR RECORD COMPANY WATER ...

Summer, 1976. Punk, live punk, is about to explode in the capital. Tap rooms, Poly bars and sweaty clubs will host its unwashed greats. Johnny Black looks ...