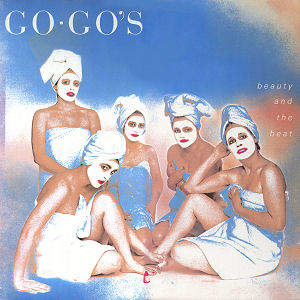 The Go-Go's: Squealin' With A Feelin'

IT HARDLY seems right that five diminutive females dwarfed behind guitars and drums would be showing the door to half of Southern California's elder statesmen ...

GO-GO'S: 1. Bouncing entertainment; choreographed Happy Pill; females showing a hell of a lot for little reward. 2. Hollywood pink-punk band; all of the above ...

THEY BURST on stage as bubbly as cheap champagne with a resounding "pop". Their clothes are swinging teenage sixties, miniskirts and tights, Mary Quant boots ...

THE DIFFICULT thing here is reconciling expectations based on long-time familiarity with the vinyl reality. For you, the Go-Go's are the all-female L.A. quintet behind ...

The Go-Go's: Beauty and the Beat (IRS)

IT HASN'T been easy to be a fan of groups like the Raspberries during the past few years. What those minions of white-suited quartets and ...

They Think They're Go-Go

IT WASN'T the same seeing the Police at the Spectrum, Philadelphia's pro sports arena, as it was back at CBGB or even the midsize Palladium. ...

"ASK ANY TEN people in the popular recording field about female singers and nine of them will say, 'forget it, the percentage of girl singers ...

The Go-Go's: Go-Go's Of Your Dreams

DEEP IN THE soul of every writer lies a secret: what does the writer do to avoid writing? I'll empty my brain pan now: I ...

Review by Laura Fissinger, Musician, May 1984

CAR 'N' BAR dance bands area pop staple with a frequently short shelf life. One or two albums into some of these careers, then it's ...

WEIRD HOW male listeners have to go through this whole process of Coming To Terms with the GoGos' musically simplistic, sentimentally sophisticated hybrid of high ...

Rapping To The Go-Go's

ON THE OCCASION of the release of their latest album, America's only rock 'n' roll magazine that bills itself as such asked for the two ...

A COUPLE OF YEARS AGO, Belinda Carlisle's life was everything it wasn't supposed to be. ...

Miles Copeland: "Make sure you write what a nasty S.O.B. I am"

STING'S BRING On the Night was a big-budget home movie by a talented musician convinced that every breath he takes deserves to be documented. It ...

She's come through the live-fast, look-bad, almost die-young scene to a beautiful future. Belinda Carlisle tells Lucy O'Brien how she did it ...

• She used to live in the untidiest house in Hollywood!• She plays music to her plants!• She's had about half an hour's holiday to ...

The Go-Go's: The Beat And How To Get It (Again)

"YOU LOOK FAMILIAR," Kathy Valentine says as she scavenges through the remains of what were once many bags of bagels. "We didn't have our way ...

The Go-Go's: The Fab Femme Five

Retrospective and Interview by Paul Elliott, Q, May 2002

Long before girl-band conveyor-belt pop and mainstream stardom for their mucky singer Belinda Carlisle, there was "the world's best female band" The Go-Go's. Meet the ...

Jane Wiedlin of the Go-Go's