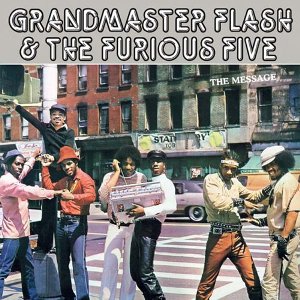 Flash talks about his latest album The Bridge, but then takes us back to the Bronx in the mid-'70s, his technical innovations, experiences with Sugar Hill records, and his addiction and the lost years.

Report and Interview by Richard Grabel, New Musical Express, 30 May 1981

The Clash: The Foul-Up

THE LIGHTS dimmed. Dramatic Spanish bolero music from Clint Eastwood's For a Few Dollars More came on over the speakers, and the spotlights roamed from ...

THE SOUTH BRONX lies just across a thin stretch of the Harlem River from Manhattan, but it could be worlds away. ...

ALREADY WRITTEN about in rival publications but well worth another mention here to remind you of their greatness. ...

IN WHICH THE message from the apple-stretching New York would seem to read: don't get caught in a rap rut, move on and expand. Whether ...

FLASH – AAAAH! Saviour of the Universe. Saviour of my sanity, anyway. "The Message" shines out from amongst the New Musik murk they play out ...

ALTHOUGH IT'S doubtful Nancy Reagan listens to either rap or reggae records (or anything more soulful than Ray Anthony, for that matter), she ought to ...

THE MOST simple consideration of live performance throws up two basic types; those shows that define musical experience, are the quintessential medium for the music ...

RAP RECORDS had messages before 'The Message' exploded across the airwaves in 1982, but it remains extremely tempting to argue that it was Grandmaster Flash ...

Out of the subway and into the charts, hip hop is stronger than it's ever been, with dazzling new talents like LL Cool J and ...

"I SAID A HIP, HOP..." starts the rap by The Sugar Hill Gang's Wonder Mike over a riff faithfully copied from (though only much later ...

You Spin Me Round

"Two turntables and a microphone," are, says Beck, "where it's at." For more than a decade Technics 1200 record decks have provided the backbone of ...

A LITTLE over two minutes into The Fugees' 1996 hit 'Ready Or Not', the voice of Lauryn Hill is thrown into relief by a brief ...

IMAGINE, IF you will, "The Bible" performed in rhyme by young men in baseball hats. Breakdancing. It would have gone something like this. ...

The True Life Adventures Of Flash

A RECENT SURVEY suggests that up to 62% of the world's population is now a famous DJ. In hotspots like Shoreditch, it's easier to find ...

Grandmaster Flash: All Hands On Deck

Profile and Interview by Andrew Purcell, The Guardian, 27 February 2009

They thought he was mad, they spat him off stage, he hit the drugs... But Grandmaster Flash gave 'DJ' a whole new meaning. Andrew Purcell ...

Grand Wizard Theodore accidentally invents scratching in 1975 (or does he?)

IT FEELS oddly incongruous to witness one of the legendary founding fathers of a billion-dollar musical genre playing to 300 people in a modest pub-style ...

How we made: Jiggs Chase and Ed Fletcher on 'The Message'

Interview by Caroline Sullivan, The Guardian, 27 May 2013

The producer and MC of the hip-hop classic recall trying to persuade Grandmaster Flash to grow a social conscience.               ...

Grandmaster Flash breaks down Netflix's new series The Get Down

We caught up with the hip-hop legend behind Baz Luhrmann's latest creation ...