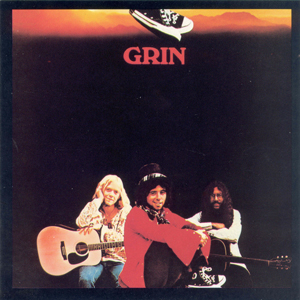 Jackie Lomax and Band Playing at the Whisky ...

THE DEBUT ALBUM of Nils Lofgren's trio, Grin, brilliantly closed the quartet of albums that had begun with the Neil Young/Crazy Horse collaboration, Everybody Knows ...

NILS LOFGREN and Fanny are odds-on, for my money, the two most exciting young talents in mainstream rock today. Nils' initial reputation came about from ...

IF YOU'RE A Nils Lofgren fan, the first thing you'll notice here is that the whole setup is wrong. The album flops open from the ...

IN HIS WRITING, Grin leader Nils Lofgren shows a special affection for cowboy songs (not the actual music of the old West, but original tunes ...

A ridiculously easy winner in 1971's "most promising" category was Grin, fronted by Nils Lofgeren, whose credentials were a matter of public record long before ...

JOHN FOGERTY became a hero by living in the Bay Area for 20 years and never becoming a hippie. He didn’t desert his rock ‘n’ ...

1973 HAS BEEN the year that saw legendary heroes hit the floor. Bryan Ferry lampooned Bob Dylan in a sordid attempt to establish his own ...

NILS LOFGREN, a superb songwriter, possesses an appealing vocal style and is a fine guitarist. On the strength first three albums it’s unbelievable that he ...

AUGUST 25, 2004, was a special date in the calendar of Montgomery County, Maryland. More than 30 musicians gathered in the town of Strathmore for ...