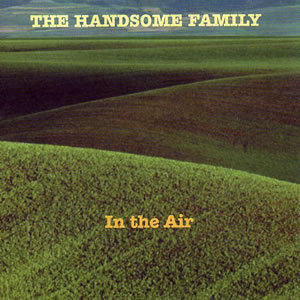 OCTOBER 1999. On the release of early-years compilation Down In The Valley - and four months prior to fourth studio album, In The Air - ...

The Handsome Family: Live in the UK

BEFORE A note's been sung or a chord struck, Rennie Sparks has invited the audience back to her shoebox-sized dressing room for shrimp cocktails. As ...

The Handsome Family: In The Air

Welcome to the dark, disturbing world of Brett and Rennie Sparks, otherwise known as THE HANDSOME FAMILY. ...

Albums from Kelly Hogan, the Handsome Family and the Mekons

Kelly Hogan & the Pine Valley Cosmonauts: Beneath the Country Underdog (Bloodshot);The Handsome Family: In the Air (Carrot Top); Mekons: Journey to the End of ...

The Handsome Family: Live at The Barbican, London

RENNIE SPARKS looks like a deep sea diver plucked out of water as she accompanies her husband on the miraculous 'Weightless Again'. There's a tube ...

THE HANDSOME FAMILY - the duo of Brett Sparks, composer, singer and instrumental jack of all trades and Rennie Sparks lyricist, harmony vocalist and plucker ...

Handsome is as Handsome does

WHAT DO YOU GET when you cross the Platters with 19th century Romanticism? Why, the new album from the Handsome Family, of course. ...