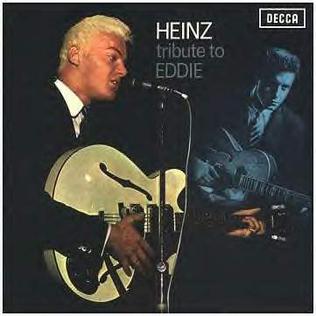 Bass guitarist wants to be a singer ...

Heinz — Is He Right?

HAS HEINZ Burt done the right thing in leaving the Tornados? Or would he have been wiser to stick with the group until they had ...

Kenny Ball and Heinz on the Film Set

SO HEINZ crashes handsomely into the charts. After the false start of his debut solo disc, 'Dreams Do Come True', his "heartfelt" tribute to Eddie ...

HEINZ DIDN'T get very far on his recent boating holiday. In fact, he only spent four days on the water out of a planned 14! ...

Heinz: I Won't Rest Until I Hit The Charts Jackpot

HEINZ HAS TWO BEST SELLERS TO HIS CREDIT NOW, BUT REFUSES TO SIT BACK AND TAKE THINGS EASY ...

Tours, Films, a Summer Season... It's ALL Happening This Year

Heinz's Hat, Some Surfing, & The Sharks!

THE FACT that Heinz has just visited Australia stuck out the proverbial mile when I met him last week, after an exhausting two week tour ...

Retrospective and Interview by John Pidgeon, Let It Rock, December 1972

EVEN IF HE was born in Germany as the music papers said, we always suspected that Heinz's hair wasn't really that colour. It was his ...

In 1999 Chris Welch interviewed singer and Tornados bass guitarist Heinz Burt about his early career and final years as a rock'n'roll legend. In this ...