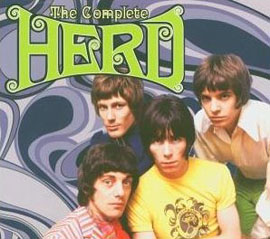 VANILLA FUDGE: 'You Keep Me Hanging On' (Atlantic). Oh! I love it. Oh it's great. I didn't recognise the beginning at first. Yeah, Vanilla Fudge. ...

Hendrix and Brown triumph at the Saville Theatre... ...

The Herd Take Over As Screamers' New Idols

MY CONTENDER as the man "most likely to get ripped to pieces by hysterical females" in 1967 is Peter Frampton, the seventeen-year-old vocal-guitarist with the ...

The Who, Traffic, the Tremeloes, Marmalade, the Herd, the Dream: City Hall, Sheffield

The Who, Traffic, the Herd, the Tremeloes, Marmalade: Walthamstow Granada, London

FANS WENT wild for both houses of the Who-Herd-Traffic-Tremeloes tour when it hit Walthamstow Granada on Saturday. ...

Traffic, The Who, The Herd: Danger: Who At Work!

THE WHO-TRAFFIC-Herd-Tremeloe tour, while proving to be a sell-out attraction, has caused a certain amount of anxiety among those people whose job it is to ...

A BIRD'S eye view of peter frampton of the herd With the looks of Scott Walker and the girl appeal of Steve Marriott, Peter Frampton of ...

The Tremeloes: War Of The Groups

The Herd: Move 'Em Out It's The Real Herd

A POACHED egg is many things to many people. To advertising copy writers, it is a symbol of health and efficiency. To the savages of ...

WHEN YOU'RE tired, exhausted, and in the right mood for a few weeks holiday, it must be pretty depressing not to be able to see ...

Hey, have YOU heard the HERD? The Herd: Brough Assembly Hall, Aylesbury

What progress is being made by the group voted Brightest Hope of '68 in Disc's Poll? Hugh Nolan reports ...

GREAT SCOTT! That's my immediate reaction after seeing and hearing Scott Walker break through the scream barrier last Friday evening at the Brighton Dome. The ...

After Big Split Herd Out Of Exile

YOU MAY NOT have seen much of the Herd recently since their self-imposed retreat following a dispute with managers Howard and Blaikley, but I have ...

IF THERE'S one particular impression of Humble Pie that sinks deeper than any other, it's the name. ...

Frampton: the Musician Who Beat a Pretty Face

Peter Frampton: Fables Of The Resurrection

He had the biggest-selling album of all time and then "completely tanked" for 28 years. Peter Frampton, this is your rebooted life! ...