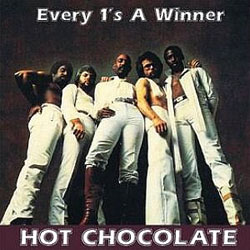 The Hot Chocolate frontman/songwriter talks about the good year the band have just had: about never being certain of hits and having no fixed following; working without management support; not rushing to go on the road; singles vs. albums; producer Mickie Most; being an integrated band; not being a soul act per se... and why he shaves his head!

HOT CHOCOLATE'S 'Love Is Life' looks like the third giant hit for Mickie Most's new Rak label — and one of those three nearly went ...

Hot Chocolate's Errol Brown owns up... The Lady Is A Nympho!

"NO MESSIN' about," chuckled Errol Brown, that shiny-domed Hot Chocolateer who co-wrote 'You Could've Been A Lady' — "it's a song all about a nymphomaniac." ...

THERE IS absolutely no getting away from the fact that it was an excessively hot and sticky afternoon. Sweaterama incarnate. Clothing stuck unpleasantly to the ...

AS EVERYONE KNOWS, soul music is in now more than ever, but in the frenzy of cheerful accolades and mountainous monies embracing Barry White and ...

A CLUTCH of nubile girls are usefully spending their school holidays hanging around outside the Bell Record Company offices in the hope of a glimpse ...

REVIEWING ACTS in nightclubs rather than the usual concert hall is really something else. So much is happening, the band has to work really hard ...

Hot Chocolate: Hot on the Trail

HOT CHOCOLATE, the faceless men of British pop, leave soon for the real land of hope and glory, America, confident that they will be a ...

IT WAS the funniest ending to a concert I've ever seen. Hot Chocolate said their goodbyes, walked off and, I imagine, stood in the wings ...

GREAT POPULAR music is generally not a cynical or synthetic product, but something personal to one individual that many, many others find appealing. ...

Profile and Interview by Mick Brown, The Guardian, 31 July 1982

FRESH FROM his evening shower and now only half an hour away from facing 2,000 of his most ardent supporters, Errol Brown, a white towel ...