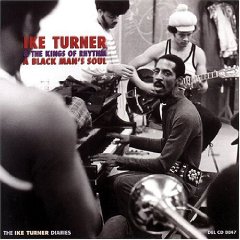 IF YOU didn't know Ike Turner was 70 before this show, you certainly did within minutes of his swaggering entrance. ...

IKE AND TINA TURNER have been packing suitcases and riding buses for years, playing the Sportmen's Clubs and the Showcase Lounges, sometimes making it into ...

The Roots of Ike Turner

PEOPLE ALWAYS ask why Ike Turner is content to stand in the background, playing those fine guitar riffs to an audience totally oblivious to him ...

Ike Turner: What Love Had To Do With It

Interview by Caroline Sullivan, The Guardian, 26 May 1999

Ike Turner last spoke to his ex-wife Tina in 1986. Since then, he tells Caroline Sullivan, he's taken too much flak ...

The Importance of Being Izear: Ike Turner with Nigel Cawthorne: Takin' Back My Name (Virgin)

Ike Turner: Beneath All That Tarnish

IKE TURNER – Tina’s ex-bad half – has a reputation for being the wicked prince of the blues. His former missus in her as-told-to/tell-all book, ...

Ike Turner: The Redemption Of Ike

"IF YOU KNOW ME, you love me," boasts Ike Turner, reclining in the sizzling sunshine and sipping a glass of water. An interesting claim ...

FUNNY HOW things change. A little over a decade ago, Ike Turner was rock'n'roll's terminal pariah. Damned by 1993's What's Love Got To Do With ...

Demonised during his lifetime, Ike Turner left a musical legacy that matched his fearsome reputation. Andria Lisle, a former associate, pays her respects to one ...

"A little punk, a little jazz, a little shoegaze": Meet the new blues

Report and Interview by Laura Barton, The Guardian, 1 January 2015

From the spirituals of the deep south to the White Stripes, it's a music that has constantly reimagined itself. But is anyone really ready for ...