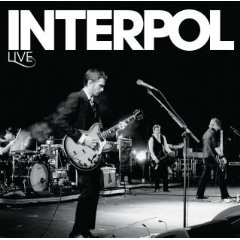 Interpol: Turn on the Bright Lights

I FIND SOMETHING terribly tragic about Interpol. It's more than Paul Banks' elegiac vocals, which stir my gut every time I hear them, so much ...

YOU'D NEVER guess from the pre-show mania that New York rockers Interpol are not yet superstars. ...

IT SEEMS ALMOST QUAINT these days to protest that a band is derivative. Not so long ago bands would talk themselves hoarse in defence of ...

Review and Interview by Toby Manning, Q, May 2003

It's not all post-punk brooding. They like drugs and girls too. ...

WHILST SERVING time in a French prison for pathological thieving, Jean Genet wrote that "a man must dream a long time in order to act ...

AT NO POINT during this interview do any of us snort intoxicants off the spines of tawny hookers or clamber naked to the top of ...

ON PAPER, Interpol's second album should offer more grist to the mill of those who think they're too indebted to Joy Division. ...

Interpol: Our Love to Admire

INTERPOL ARE TOO EASILY MADE the butt of a joke, but so what? Jokes require no explanation. Since 2002's Turn On The Bright Lights they've ...

Interpol: Our Love To Admire

THE ART WORK for Interpol's third album Our Love To Admire is a series of photographs taken from New York City's Natural History museum, depicting ...

THEY NEVER CAUGHT quite as much mainstream attention as other modern New York bands like the Strokes or the Yeah Yeah Yeahs. But now, Interpol ...

Interpol on supermodels, surfing and (not) hanging out with the Strokes

THINGS HAVE CHANGED on the eve of the New Yorkers' fifth album, El Pintor. Not only is it their first without bassist, Carlos D, they ...

This oral history of New York's musical renaissance is vivid, informative and full of passion. ...

There's a charisma vacuum where the flamboyant Carlos "D" Dengler used to be, says Rick Pearson, but this show was a reminder of the importance ...

WITH WARMTH and emotional heft, the New York band continue their journey towards rock's top tier ...