It's a Beautiful Day 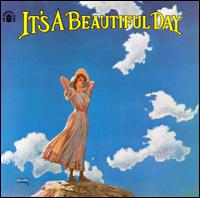 Live Review by Philip Elwood, The San Francisco Examiner, 24 May 1968

A Wide Range of New Sounds at the Fillmore ...

BRIGHTEST AND most compelling of the newer local modern music groups, and certainly the one with the most intriguing sounds and name is violinist David ...

It's a Beautiful Day: The Best Kept Secret Is Out At Last

UNTIL VERY recently, It's A Beautiful Day was one of the best-kept secrets in the music business — on this side of the Atlantic, at ...

ROCKERS TAKE OVER FOR A NIGHT ...

Sounds of the '70s at Montreux

Report by Geoffrey Cannon, The Guardian, 1 May 1970

UP THE ROAD from where I'm sitting now, senior television executives from ail over Europe, and from America and Japan, have been descending into a ...

IT'S A BEAUTIFUL DAY GOES ON A TIME TRIP ...

Festival remembers the Summer of Love

Report by Charles Bermant, The Globe and Mail, 14 September 1987

SAN FRANCISCO – The first cosmic occurrence was before noon, when Jesse Colin Young sang the last chorus of 'Get Together'. He let the crowd ...