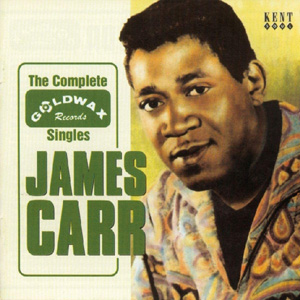 The Lost Man of Southern Soul looks back at his Mississippi childhood; his background singing gospel; meeting Quinton Claunch and starting to make records, and after the lost years, touring Japan and his current activities.

James Carr: At The Dark End Of The Street (Blue Side, import)

"THE WORLD'S Greatest Soul Singer", boasts the cover of this magnificent album, and I ain't about to argue. In fact I have long regarded the ...

James Carr: At the Dark End of the Street (Blue Side)

Artist: James Carr.Album: At the Dark End of the Street (Blue Side). ...

WHEN IT WAS BUILT IN THE 1950s, Memphis's Mid South Building was probably stylish and sleek. Today, the blocky turquoise exterior pales next to the ...

James Carr: At the Dark End of the Soul

Profile and Interview by Robert Gordon, L.A. Weekly, May 1993

THE WALLS OF the office are mostly bare, the blue carpeting subdued. The fax machine in the corner seems like an anachronism. Only the large ...

Cheatin' Meeting of Minds: 'The Dark End of the Street'

"THIS IS probably one of the greatest songs that's ever come out of black American music," announces Ricky Ross over the piano intro to Deacon ...

ONE OF THE finest exponents of Southern soul, whose intense performances won him a strong cult following, Carr made the original versions of the often-recorded ...

Guitarist, record producer and songwriter who co-wrote 'The Dark End of the Street' and worked with Elvis Presley, Aretha Franklin and Tammy Wynette. ...