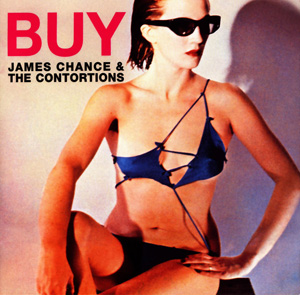 I WAS wearing headphones. My teeth were aching again, and the lump behind my left ear was still as bad as ever. All 16 of ...

Q: Why Interview James Chance? A: Because He's There

GETTING TO NO YOU: NO NEW YORK ON RECORD ...

WELCOME TO the unwave. I haven't heard so much ferociously avant-garde and aggressively ugly music since Albert Ayler puked all over my brain back in ...

James White and The Blacks: Off White (ZE)

JAMES CHANCE, alias James White, leader of The Contortions aka The Blacks, has been making something of a name for himself this past year or ...

James White and the Reds

A comparative study (sort of) of aggressive American nihilism and French anarchists with beer cans. IAN PENMAN adjudicates on matters moral and philosophical. ...

LIGHTBULBS FLASH dutifully o'er our heads, signifying but an insufficient brightness. We go sleepily about our business. Flashbulbs slash daily at our eyes, fulfilling narcissism. ...

SOME DAYS it's fun being a real Midwesterner trying to make it in the art rackets; the powers on the good-taste-is-timely Coasts already have you ...

IT ALL depends how deranged you are to start with. James Chance – née White, née Black – makes impossibly futile, dead music, fit only ...

James Chance: Save The Last Chance For Me!

Sax and drugs and contorted soul – Ian Penman meets his hero in another instalment of conversations with James Chance. London 1981. ...

LISTEN TO the cacaphonous cutting edge of no wave punk-jazz in the privacy of your very own SONY walk-man. Be-bop down the street snapping yer ...

Review and Interview by Jim Sullivan, Boston Globe, The, 15 September 1995

CAMBRIDGE – James Chance, Milwaukee born 'n' bred, as well as musically educated, tried to fit in when he moved to New York City in ...

Zoë Street Howe talks to James Chance about his new retrospective collection Twist Your Soul and his relationships with James Brown and Lydia Lunch. ...