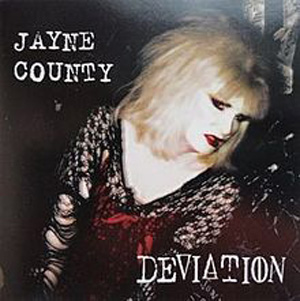 The former Wayne County talks about where she's at now: splitting her time between London and Berlin; making a new album and touring Europe; planning to study Biblical Archaeology [we kid you not]; her gender reassignment... and paying for it by sex work in Berlin.

Carol Clerk shows an unhealthy interest in the bodily development of JAYNE COUNTY. ...

THE FIRST thing Jayne County has to say is "It's a bit short, can't you make it any longer?" And she was only talking about ...