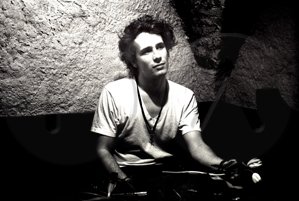 Remastered version of the original 1994 album with second CD of outtakes/rarities and DVD of Grace vids and footage of Buckley in Bearsville, New York. ...

Jeff Buckley asks the questions, and Esquivel gives us a glimpse of his happy half-century of music making.

"I NEED A Guinness," murmurs Jeff Buckley, after completing one of his many audacious sorties on the collective heartstring this evening. "And I really mean ...

DESPITE WHAT WE read in the live pages, many gigs these days are sterile, perfunctory affairs. Bands arrive, playing the roles they're comfortable with and ...

In At The Deep End

AWARE HE COULD be unfairly accused of trading on the family name, Jeff Buckley, Tim Buckley's 27-year-old son, has spent the last three years honing ...

Born with a voice to die for and a runaway father who follows him everywhere, JEFF BUCKLEY's wish not to discuss the late, great old ...

OVER THE LAST FEW MONTHS Jeff Buckley has become a contender. A minor critical furore greeted his first live mini-LP, while a handful of mesmeric ...

AS JEFF Buckley ambled lugubriously on to the stage, the faces of pretty much everyone in the capacity crowd betrayed the same thought — "How ...

ONE OF MY favourite sorts of music has no real generic handle by which it can be carried into the marketplace. Informed by jazz, rock, ...

Caitlin Moran tries to find out why Jeff Buckley has dreams about having his skin flayed by a mad sculptor ...

"There is no name yet for the places he or his voice can't go..." They said that about Sixties archangel Tim Buckley and they're saying ...

Jeff Buckley: "It's Never Over"

JUST BEFORE 9PM ON THE EVENING of Thursday, May 29, Jeff Buckley and his friend Keith Foti realised they were lost. ...

On May 29, just as he was to begin recording the follow-up to his acclaimed album, Grace, JEFF BUCKLEY decided to take a swim in ...

Retrospective by Dave Simpson, The Guardian, 1 May 1998

Singer Jeff Buckley lived in the shadow of his father Tim's death. Dave Simpson remembers meeting the visionary of pain and loss, and hears the ...

Jeff Buckley: Sketches (For My Sweetheart The Drunk) (Epic)

YOUR INITIAL thoughts as you listen to this — the first posthumous release from mercurial troubadour Jeff Buckley (who drowned in the Mississippi last May) ...

Jeff Buckley: Sketches (For My Sweetheart The Drunk) (Columbia)

FANS OF Grace might find this album tough going. For one thing, it's hard to divorce the circumstances of its existence from the music – ...

THERE IS A PICTURE, taken early in May 1997, at Ellen’s Soul Food Restaurant in Memphis. It’s a Sunday afternoon, and we’ve just arrived from ...

IN THE EARLY '90s, two restlessly inventive musicians, Jeff Buckley and Gary Lucas, both haunted by phantoms from the '60s, crossed a generation gap and ...

Report and Interview by Mark Paytress, The Guardian, 30 October 2002

IT IS FIVE YEARS since Jeff Buckley took his final, mid-evening stroll into the Wolf River, a sleepy tourist spot on the outskirts of Memphis, ...

Jeff Buckley: They Don't Even Know Me Yet

A Pure Drop: The Life Of Jeff Buckley

Jeff Buckley in the U.K.

Book Excerpt by Jim Irvin, 'From Hallelujah to the Last Goodbye' (Post Hill), May 2018