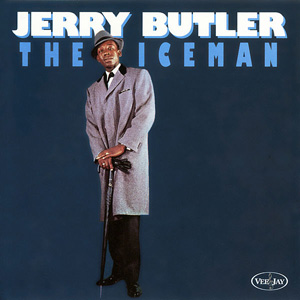 Jerry Butler and Allen Toussaint: The Spice Of Life

IT'S NOT so long since soul albums were merely collections of singles, plus a few make-weight tracks. ...

"THE CONCEPT of my album was to capture variety in a record. 'One Night Affair' deals with the feeling I think all men have at ...

The Iceman Talking: The Life And Times Of Jerry Butler

BUTLER'S MUSIC Workshop is upstairs in a tatty warehouse building in Chicago's South Side, very near Chinatown and uncomfortably near Lake Michigan so it gets ...

JERRY BUTLER is unquestionably the King of Chicago-style cool R&B (the name Ice Man didn't come for nothing – at a time when Pickett epitomized ...

IT WAS deejay George Wood who originally tagged Jerry Butler "The Iceman" because of his on-stage cool and it's still an especially appropriate nickname, not ...

JERRY BUTLER, throughout his career, has consistently sung with a mollasses smooth voice that's deep, sensitive and sincere. ...

Bobby Womack: Home Is Where The Heart Is (CBS)Jerry Butler: Suite For The Single Girl (Motown) ...

There were those who felt Jerry Butler might fade into obscurity. But, you can't keep a good man down and he's back with a vengeance...a ...

Jerry talks to B&S about his reunion with Gamble and Huff and his plans for the future... ...

FEW THINGS in this amorphous and inchoate universe are so perfect as ‘I’m So Proud’ or ‘Woman’s Got Soul’ – or very nearly any of ...

As well as being two classic albums of '60s pop-soul, The Ice Man Cometh and Ice on Ice comprise a tale of two cities – ...