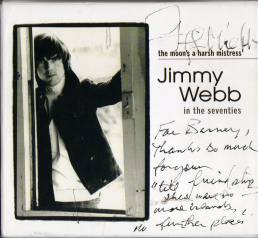 WHEN THE Boo Radleys wrote a song called 'Jimmy Webb is God' they presumably weren't gripped by a vision of the Lord playing a gig ...

The Great American Songwriter looks back at his strict Baptist upbringing; the catastrophe of his mother's death; his love of complex chords, and how that has gone missing today; his love of Burt Bacharach and the Beatles; his early LA experiences and becoming a music copyist; the importance of Pet Sounds; his nostalgia for grace, and on his fabulous luck as a songwriter.

Jim Webb: Flood Of Grammys — Songwriter Hits the Top at 21

AT THE AGE of 9, Jim Webb took up the organ, a utilitarian move since his father was (and is) a Baptist minister in Oklahoma ...

Jimmy Webb Writes For The Lonely

IT IS VERY difficult for me to be objective about Jim Webb because there are some composers or artists who hit a chord of sympathy ...

Richard Harris: 'He Still Wants To Be A Pop Star..!'

"JIMMY WEBB," explained smooth voiced Glen Campbell, somewhere south of Wichita, but still on the line, "is a likeable easy going country boy. One of ...

WORK ON the theory that ‘talent will out’ – and Jim Webb, fantastically consistent young American composer, would have made it anyway. In fact, though, ...

ARRIVING IN nearly the same breath as the magnificent Words And Music, this second album by Jimmy Webb is another impressive step in the conspiracy ...

THERE MAY BE something extremely valid in a composer performing his own highly successful material in concert, and though Jimmy Webb accomplished this to a ...

OVER THE LAST four years, I've suffered some of the worst abuse and harassment imaginable simply because of my insistence that Jimmy Webb is the ...

JIMMY WEBB is the still-under-30 composer who appeared from nowhere nine years ago with a spate of pop hits including 'By the Time I Get ...

What first made you want to write a song? ...

“Unplugged” versions of ten Webb staples, performed at the grand piano by The Man Himself. Vocal cameos by Shawn Colvin (Didn’t We), Marc Cohn (If ...

Up Up and Away Jimmy Webb and The 5th Dimension

ONE OF the most respected songwriters of the modern era, Jimmy Webb was just 18 years old when he struck up a friendship with Marc ...

Jimmy Webb: Tunesmith: Inside The Art Of Songwriting

GENIUS BEHIND 'MacArthur Park' and 'Wichita Lineman' examines his craft, peruses his muse, and almost makes sense of it all ...

WHEN YOU PUT Paul Williams and Jimmy Webb in a room, you basically have the collective soundtrack of the late '60s and '70s in pop ...

RBP: Bones Howe remembered you as being very shy when he first met you circa 1967. Is that how you remember it? ...

Jimmy Webb: The man who made the whole world sing

Interview by John Aizlewood, The Evening Standard, 6 May 2005

Jimmy Webb, composer of classics such as 'Wichita Lineman' and 'Up, Up and Away', is about to step up to the mike for two rare ...

JIMMY WEBB is sad. He looks around him at the world we inhabit and sees culture nose-diving everywhere. Subtlety is squeezed, ambiguity flattened. People don’t ...

BEFORE HE WAS 21 Jimmy Webb had already written some of pop's most enduring songs, including 'By The Time I Get To Phoenix' (which Frank ...

Recent books by and about favorite boomer musicians and influencers ...