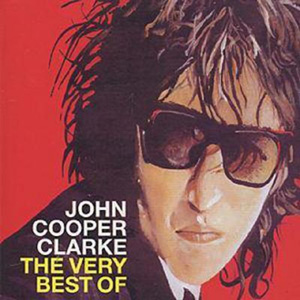 The Punk Poet talks about comic writing vs. being a comedian; about writing poetry; about putting his words to music; and about his place in the music business.

THERE IS undoubtedly a great deal of refining and cleaning to be done on Buzzcocks' material before the album they can so definitely record comes ...

The Dangers Of Being Likeably Listenable ...

John Cooper Clarke: Just Another Ex-Gravedigger Poet Into Dada and the TV

JOHN COOPER-CLARKE, the poet who came in from the cold ...

An exercise in calculation ...

RACE TODAY magazine/organisation, acknowledging the central importance of Manchester in the struggle of black people, launched their northern campaign with a fund raising "Creation For ...

NB: To be briskly recited aloud in a thick Mancunian (due east of Liverpudlian) singsong: ...

Interview by uncredited writer, ZigZag, May 1980

The Bard Of Beasley Street At The Seat Of Learning

THE OXFORD University Union porter peered at us fish-eyed. "Are you members?" he said. "Er, no - we're with the poet." ...

Phantom of the Factory — It's Martin Hannett! A legend in his own town!! Didsbury!!!

SCOTT-HERON OF THE ANTARCTIC ...

Punk's not dead, and neither is its poet laureate, John Cooper Clarke. ...