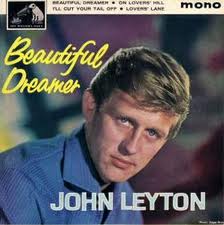 Denver is hit of Parnes package ...

John Leyton: I Can't Keep On With This Sob Stuff

WATCH OUT for John Leyton's next release. The change in style is going to hit you smack between the ears! Gone are the emotional lyrics ...

FEW GROWN up people, I find, have a genuine respect for the pop singer. They see him as a creature who makes inexplicably large sums ...

Leyton Wants a House — in the South of France!

JOHN LEYTON, was happily posing for photographers near EMI's office in London. As usual he was handsomely groomed and well dressed. And, despite the fact ...

I call them The Terrors of Tin Pan Alley. They're the boys who are my closest friends in show business. When we get together, anything ...

A Tribute to Joe Meek— Far Out Before His Time

THROUGHOUT his career, British record producer Joe Meek showed a strong and consistent fascination with outer space and supernatural themes. A kind of backroom electronic ...