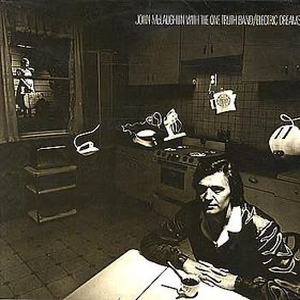 THE IMPORTANCE of the use of rock rhythms by the Miles Davis Quintet is only now beginning to be realised. Like everything Miles does, it ...

JACK BRUCE described Lifetime as simply the best band in the world. Jack, as quarter of Lifetime, might of course be a little biased. But ...

John McLaughlin: My Goal's Beyond

JOHN MCLAUGHLIN has been around: gigging with Graham Bond in 1966, Jack Bruce in ‘68 and intermittently with Miles Davis since then, he has cut ...

John McLaughlin: My Goal's Beyond (Douglas 9)

John McLaughlin: Man For All Seasons

John McLaughlin: The Best of All Possible Worlds

IT WAS IN the very first-ever issue of this paper that a long article on John McLaughlin appeared, praising him to the skies and honouring ...

Jamming in the spirit of Coltrane ...

The Captain Kirk in John McLaughlin

PART 1: IAN MacDONALD CHARTS THE RISE AND RISE OF THE COLOSSUS OF ELECTRIC GUITAR ...

John McLaughlin: It Was Natural Evolution

NEW YORK: Although John McLaughlin's decision to disband the Mahavishnu Orchestra came as a surprise in the closing weeks of 1973, further reflections point to ...

John McLaughlin and Carlos Santana: Cruisin' With The Guru

MAHAVISHNU JOHN MCLAUGHLIN has taken the guitar further in the last two years of his career than most players hope to in a lifetime. His ...

John McLaughlin: Phew! — This is a Jolly Interesting Article!

— And BOY! has it got a lot in it! First, there's the full gen on Miles Davis, plus all the top-secret stuff about In ...

THIS WAS A celebration of John McLaughlin's 25th anniversary as a guitar player — an event similarly rnarked by the recent Electric Guitarist album, which ...

A COMBINATION of John McLaughlin, Al Di Meola and Paco De Lucia — three guitarists in the world heavyweight class — promises a multitude of ...

Pop Royalty's First-Call Bassist Is Into More Than Keeping Time. ...

Retrospective and Interview by Edwin Pouncey, The Wire, July 1997

Now into his fifth decade at the doors of perception, label boss ALAN DOUGLAS hasworked with many of the century's underground greats, from Lenny Bruce, ...

John McLaughlin: The Heart Of Things — Live In Paris