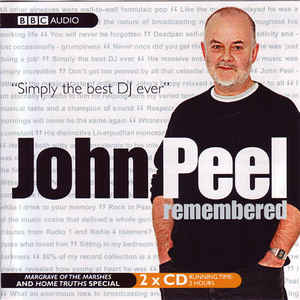 An Audience With John Peel

Celeb 1: Howie B: With this playlist culture, when do you decide what's going to be played on your radio show? ...

The DJ attempts to explain himself; argues he's more a fan than part of the machine; discusses the diversity of his listenership; touches on his kids' relationship with music; holds forth on his paymaster, Radio 1, and what gets played on it; bemoans the poor quality of current UK music; disputes his status as an indie figurehead; and ruefully answers Martin's questions about his commercial voice-overs...

IT'S IRONIC that the top number one ace disc-jockey of the year in our poll is one of the few people in the business who ...

Isleys and Peel 'Do Their Thing'

THERE IS no obvious connection between John Peel and the Isley Brothers. Both are in a different "bag," yet both have one thing in common ...

In the three years since he first won the Top DJ title in the MM Poll, John Peel has been mocked and worshipped. Today he wipes the ...

John Peel: Peel And The Pig — An Everyday Story Of Country Folk

JOHN PEEL is a sensitive figure with a sturdy patch on the crotch of his jeans and a tendency towards schoolgirls and sensible underwear. A ...

THERE IS no need to ask where John Peel was in the summer of love. Anybody with enough brain-cells left to recall the era will ...

JOHN PEEL IS sitting in his pyjamas in the kitchen of his Suffolk home. It is a Sunday afternoon. On the wall is a Radio ...

John Peel: Man Of The Match

"HELLO, I'M A little fat chap that plays records on the radio," DJ John Peel announced at the start of a recent broadcast. ...

Thousands, if not millions, owe their pop sensibilities to JOHN PEEL, indie's very own godfather. But at 58, IAN FORTNAM asks the "old feller" if ...

"WHY DO people always have a go at Belgium?" These are the first words uttered by John Peel on the night of Tuesday 24th August, ...

John Peel: Peelin' In The Years

IF YOU WANT to know what influence John Peel had, and what he stood for, listening to Radio One in the hours after his death ...

LONG BEFORE we met, John Peel felt like a good friend. For those millions of us who spent our adolescence glued to his late-night radio ...

God's DJ would have been 71 on Monday. David Buckley recalls a birthday encounter for MOJO online... ...