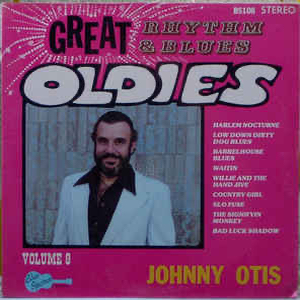 From Little Esther to Big Mama, "The Duke Ellington of Watts" takes us back to Central Avenue: the shysters, the talent, the clubs and record labels; the hits, the misses and the rip-offs.

'50s R&B King Otis talks about the songs: 'Willie and the Hand Jive', 'Hound Dog'; the artists: Little Esther, Etta James; his son Shuggie and music education; and he rails against the ravaged black ghettos, and the lie of "integration".

"I'm gonna lay right here on this wall, And drink this beer, And watch her walk. You heard me call a while ...

Johnny Otis is a 48-year-old Greek American, genetically white but black in every other conceivable respect. And if that’s difficult to comprehend, consider that, as ...

Johnny Otis: Doin' That Hand Jive With His Feet

When the Johnny Otis Show appears on stage, it brings years and years of rhythm and blues history with it. ...

Johnny Otis: Pioneers of Rock: Vol. 2The Platters: The Best of the PlattersJackie Wilson: Greatest Hits ...

Johnny Otis: The Godfather of R&B

I THOUGHT Johnny Otis was suffering from over-exposure Dave Wolf who has drained his life savings to bring over Johnny's entire package thinks not. So ...

DO YOU FEEL all right? I mean, are you ready to put yo' hands together one time and say yeah? Louder, I wanna hear you ...

IT'S BECOMING readily apparent that one salient characteristic of the first batch of Los Angeles bands (let's leave those lovable beach punks out of this) ...

SOLOMON BURKE looked more like Don Corleone surveying his domain in The Godfather than a preacher preparing to conduct a recent late-afternoon service. ...

"THE BARRELHOUSE used to be right down there on the northeast corner of Wilmington," Johnny Otis said Saturday afternoon, referring to the nightclub – a ...

JOHNNY OTIS, the renaissance man of rhythm and blues, is somewhat ambivalent about entering his ninth decade. "I have two kinds of feelings," he concedes. ...

EMBER RECORDS was founded in London in 1960 by Jeffrey S. Kruger. A longtime jazz fan – he played piano in his own band Sonny ...