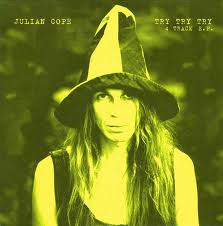 Presenting his new album Peggy Suicide to the French rock press, Julian Cope expounds on not caring, not being Sting or Billy Bragg; Peggy Suicide being Mother Earth freaking out; how being a cult = not selling records, and on being an ambassador of looseness, trying to turn people on that it's cool to hang upside down or take drugs.

LIVING IN a wiggly world! Spanning the sublime and the ridiculous with the ease of the truly uncritical, Julian Cope flies on (among other things) ...

I FEAR WE might shut our collective gob for the rest of time and we still wouldn’t get a good Julian Cope album. I didn’t ...

HIS BOTTOM lip trembles as he bites his fingernails. Beneath the familiar lazy flop of a frizzy blond fringe, his eyes are filmed with liquid. ...

Julian Cope: No tears for Julian

Profile and Interview by Adam Sweeting, The Guardian, 24 October 1986

After stunning success with The Teardrop Explodes, Julian Cope blew up. He's back with a new hit. Adam Sweeting reports ...

THERE HAVE been four Saint Julians. One, Julian of Toledo, persecuted the Jews; Julian the Hospitaller murdered his mum and dad by mistake; and three, ...

Interview by Ira Robbins, Spin, May 1987

This is a transcription of an audio interview with Julian Cope at a conference in Paris. Hear it on the site here. ...

One of pop's most eccentrically self-important extremists, Julian Cope drops drugs, gets centered and creates his first brilliant album ...

Julian Cope: A Rune With A View

Powerful things, ley lines. They can make Julian Cope commune with rocks, and cause his old boss Bill Drummond to break the silence he's kept ...

Unattached, paranoid, fancy working your ass off and seeing five gigs a night, listening to 400 tapes a week and shouldering the blame when the ...

There's a fine line between genius and madness. Julian Cope erases it. ...

JULIAN COPE is even more twisted than his infamous mikestand. ...

Since it deals with that most fetishised of genres, Krautrocksampler is appropriately enough an intensely fetishisable object. Purportedly the first of a whole line of ...

RICHARD HELL once claimed that he first noticed the schism between himself and Tom Verlaine when they were on acid. Hell wanted to play the ...

IT HAS BEEN a long time since Julian Cope could be described merely as a singing psychedelic mystic eco-warrior. ...

Live Review by Edwin Pouncey, The Wire, May 2000

BILLED AS "a festival of plenty" by its curator Julian Cope, the two nights spent in the company of his various label mates, old mates ...

Profile and Interview by William Shaw, The Word, December 2003

A thin evolutionary strand connects the forgotten sounds of the psychedelic North and a meticulous chronicle of megalithic Europe. It's Julian Cope, a man whose ...

GETTING DITCHED by a major label is not always the end of the line for the big stars of yesteryear, as Terry Staunton reports ...

EVEN THOUGH THE rock star's wearing denim jeans, a strong waft of leather-kekkedness has wandered idly to Seats 2 & 3, Row E, Upper Stalls. ...

From his personal Xanadu, Julian Cope emerges with a straight-ahead rock album for the 21st century. ...

Julian Cope believes in music made by outsiders for outsiders. Now 50, and still incandescent with his passions for Krautrock and stone circles, he tells ...

ARMED WITH intellectual acumen, the arch-drude baits religion — and the Turks. ...