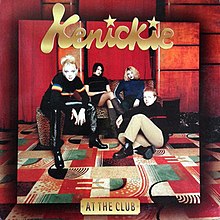 ...and KENICKIE may well be right. The coolest, funniest, sharpest, rockingest all-girl-and-boy band in Britain to The Maker out for a night on the tiles and left ...

COULD I just get this out of the way? I mean, Kenickie are wonderful for what they are, not what they aren't, but I'd just ...

Kenickie: It's Great When You're Straight 'A'... Yeah!

They're impossibly young, they're most definitely 'free', they are KENICKIE and they've got A-levels coming out of their ears! And their lo-fi three-girl-one-boy punkoid action ...

KENICKIE may barnstorm through life like kamikaze karaoke kids, but there's sadness in their madness ...

Kenickie: To Hell With Teen Spirit

KENICKIE may be young, they may use guitars, they may be supernaturally exuberant. But they are not, repeat NOT, a teen punk band. With their ...

Tory-bashing, loads of shouting and plenty of swearing. Enough about STEVEN WELLS, 'cos here's KENICKIE. And they've brought their cracking debut LP At The Club ...

KENICKIE ARE SLUMPED in the shadow of a hundred teen idols. From the wall of their rehearsal room cafe, signed photos of former sensations, from ...

HEY, LITTLE rich girl, where did you go wrong? The 'Nick should never have moved to London. Left home, met all these glittery chuckleheads, built ...