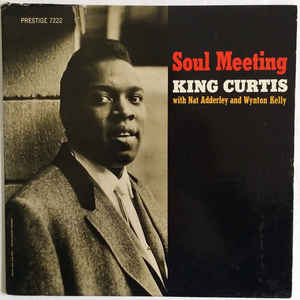 NEW YORK — The world of music moves closer as the long-established jazz spot, the Village Gate, took a brief weekend — but possibly regular ...

CURTIS OUSELEY – known the world over as King Curtis – was fatally wounded and died on Friday, August 13 only a few yards away ...

KING CURTIS, whose wailing tenor sax was heard on many hit records over the past decade, was stabbed to death on New York's West Side ...

Soul Kaleidoscope: Aretha at the Fillmore

"BLOW MAN, BLOW!" The big man with the glittering horn sent showers of squeals and shrieks out over the heads of his ecstatic shouting audience, ...

THIS IS Aretha Franklin at her absolute peak, fronting a supercharged band led by King Curtis and featuring the Memphis Horns with special guests Ray ...