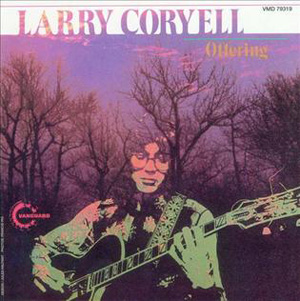 Larry Coryell: Breaking Through The Barriers

IT SEEMS hard, almost impossible, to become a top rock guitarist without embracing the blues. But Larry Coryell, who is currently appearing at the Scene, ...

SINCE HE left Gary Burton and after that four-month stint with Herbie Mann — no one has been in much doubt that Larry Coryell has ...

Coryell and Spam... (With Not So Much Miles In It)

"I'm always secretly happy when somebody comes to me after a concert and says 'I didn't like it because it was too commercial.' It means ...

YOU COULD tell it was Jazz night at Dingwalls. ...

LARRY CORYELL'S continuing musical adventures are leading him down a series of unexpected avenues — who he's playing with now is anybody's guess — but ...