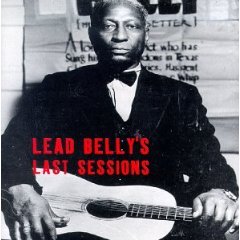 "LEADBELLY is a hard name" says Woody Guthrie, "and the hard name of a harder man." The late Woody is quoted (from the book, American ...

A Simple Song That Lives Beyond Time: Leadbelly via Kurt Cobain

According to their most recent videos, Robert Plant, Jimmy Page, Eric Clapton, the Rolling Stones and Madonna all aspire to the power, wisdom and durability ...

John Szwed: The Man Who Recorded the World – A Biography of Alan Lomax

Richard Williams hails the man who devoted his life to recording the songs and soundscapes of America and beyond. ...

The last word on the convicted killer and extraordinary musician who shaped the future of white music. ...

ROUGH GUIDE/WMN have issued some excellent pre-war blues sets recently. This set features 26 sides cut between 1926 and 1937 from the Lone Star State – ...