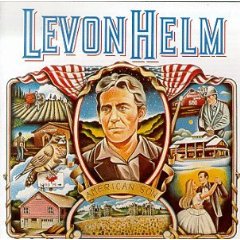 Together with his co-conspiritor Larry Campbell, the great Band drummer looks back over his recent solo activities, the people he works with, and his unique take on American music.

Levon Helm: Levon Helm and the RCO All Stars (ABC)

LEVON HELM was the kid who went north in the late 50s with a rockabilly singer called Ronnie Hawkins, whose talents were dime-a dozen in ...

An interview with Levon Helm

THE LAST TIME I saw Levon Helm we were in Arlington. He and Sissy Spacek were on the movie screen at the Regent theater and ...

The Weight on Levon Helm

LEVON HELM is perched on the arm of a carved wooden chair in his large house-cum-recording studio in Woodstock, N.Y., and he’s cackling his head ...

The Return of Levon Helm

THE FIRST TIME most people heard Levon Helm sing was way back in 1968 when The Band released Music From Big Pink. ...

LEVON HELM was the southern heart of that essentially Canadian group The Band, the drummer/singer/mandolinist who gave Robbie Robertson's songs their corn-starch authenticity. Helm it ...

The Shape I'm In: Levon Helm

IF LEVON HELM'S studios have a Green Room, then this must be it. A ramshackle den leading off a homely wooden kitchen, it's currently crawling ...

Profile and Interview by Alan Light, MSN.com, May 2011

LEVON HELM is standing in his kitchen, grinning. At the head of the table, singer-songwriter Garland Jeffreys is showing guitarist Larry Campbell, best known for ...

'THE NIGHT THEY drove old Dixie down' is the perfect emblem for the life and career of Levon Helm. This one song, written by Robbie ...

"THE FIRST TIME I saw Levon in action was in Woodstock, Ontario, about thirty-five miles from London, where I grew up. Ronnie and the Hawks ...

Oh Brother Where Art Thou? The Night They Drove Ole Levon Down

IN THE BACKWOODS gang that was The Band, Levon Helm was the lean and wiry chancer with one eye on the ladies and a voice ...

LEVON HELM wasn't exactly a household name. But when the former drummer and vocalist for The Band died in April after a long battle with ...