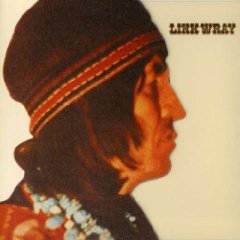 Link Wray: Be What You Want To

LINK WRAY, father of chicken-shack recording, is back with his second album since emerging from the dim glint of rock history. Be What You Want ...

The lost prophet of heavy metal remembers his early days, his legendary hit 'Rumble', being ripped-off by his own brother and keepin' on rockin'.

FOR ELDERLY rockers like me, it’s pretty incredible to be able to talk to those who were around at the start of their musical interests. ...

LINK WRAY was – I should say, is – an American guitarist who, somewhere around 1960, recorded an instrumental tune called 'Rumble'. ...

THERE'S MORE similarity between these two albums than the fact that they've both got 'Red Hot' on 'em. They're the opposite ends of the rockabilly ...

ROBERT GORDON with Link Wray recaptures the one elusive quality so often missing from music of the '70s: feeling. This is trickier than it seems ...

FOR SOME odd reason Private Stock don't want you to know that Robert Gordon used to be with those CBGB specials Tuff Darts. Richard Robinson ...

Robert Gordon with Link Wray: A Modern Elvis And The Missing Link

LINK WRAY finishes off his instrumental street opera, 'Rumble', with an amphetamine-psychosis, note-tumbling-after-note run worthy of any guitar army hero, clambers up from his bent-knee, ...

Link Wray: A Link With The Past

Tag; the jet-black hair, dark shades and gaunt Shawnee Indian cheekbones evoke an image of prowling malevolence which was crystallised by 'Rumble' but still some ...