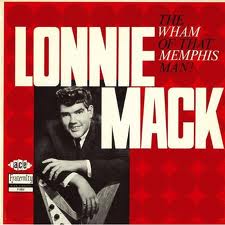 BEAT instrumentals are probably at a higher degree of popularity in the States than ever before. Discs like 'Wipeout', 'Tips Of My Fingers', 'Pipeline', 'Hot ...

Orbison Gibson album — a fine LP but could be depressing... ...

LONNIE MCINTOSH was born in Harrison, Indiana on July 18, 1941 but the family soon moved to Aurora where he went to school and spent ...

TONY JOE WHITE may well be the most sympathetic man making music today. His records show a man who cares about people, a Southerner with ...

THE SONG 'Memphis', made Johnny Rivers a big star. Remember? He recorded it live at the Whiskey A Go Go, making the club famous throughout ...

Lonnie Mack: The Hills of Indiana

"FOR BEST results, this record should be played more than once." Maybe Elektra should've included that tip in the liner notes. ...

ONLY RECENTLY did Lonnie Mack turn to the word of God and leave pop for an indefinite period. It's such a shame because this LP ...

"FIRST TIME I met Jeff Beck was when they were doin' that benefit for Ronnie Lane down in Dallas. Ah came in the door and ...

The term 'influential' is applied to almost anyone these days but there’s still a case for saying that the massively popular blues-rock guitar genre can ...