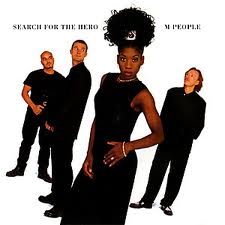 "IT'S JUST tinkly pianos and wailing slags," was how 808 State once summed up the contribution of female vocalists to house music. If it wasn't ...

THE 20TH anniversary party for Europe's premier radical newspaper, Liberation, and even Pepe Le Punk would have been silenced by the fun. ...

UNLESS YOU'VE spent the last six months in an Iraqi jail, you'll have noticed M People. Mike Pickering's house-music-goes-pop combo has grown from a personal ...

M PEOPLE are the darlings of hip clubbers and pop kids alike, recent Brits winners, and THE crossover band from club culture who can simply ...

Profile and Interview by David Toop, The Face, December 1994

M PEOPLE make timeless pop songs, have a genuine cool soul singer and a classic album that won them the Mercury Music Award — and ...

Grass-roots devotion runs deep when it comes to M People: the Mercury-scooping dance behemoth for the discerning disco-bobulator. "Sharon and Tracy have always had more ...

M People may do a lot for Peugeot, but Caroline Sullivan is not moved ...