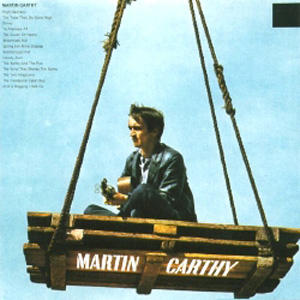 Beaulieu — a real triumph thanks to the downpour ...

Dave Swarbrick and Martin Carthy: No Restrictions On Tour For Dave And Martin

FOLK FIDDLE virtuoso Dave Swarbrick will accompany guitarist-singer Martin Carthy when he returns to Britain in the New Year. But at the end of a ...

MARTIN CARTHY and Dave Swarbrick's third album together, Byker Hill really marks a peak in the development of their partnership which is underlined by Dave's ...

MORE RE-RELEASING of supposed folk classics from Mooncrest, although this one doesn't have quite the same aura as the others that have emerged from the ...

Martin Carthy: A Passage to England

Profile and Interview by Mark Cooper, The Guardian, 29 December 1988

Martin Carthy believes in the power of performance, not purity. Mark Cooper meets the folkie who refuses to play safe. ...

A collection marked by the many shifting contours of his remarkable career. ...