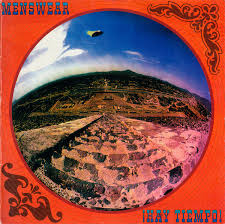 IT HAS BEEN DECIDED, already, that Menswear are going to be famous. All the stars (well, Shampoo and Pulp) turned up for their debut gig ...

When record companies went window-shopping last year, they all wanted to buy Menswear. Without even releasing a single, the band's reputation stands more upon the ...

How an obnoxious teenager, revelling in the obscurity of her pop passions, met Bros in the supermarket aisle to Damascus ...

Oh, how they laughed when MM plucked MENSWE@R out of obscurity and put them on the cover in February. The laughter stopped when the Swe@r ...

As overnight sensations go, Menswear’s hyper-speed rise to fame makes even Julia Carling look like a beginner. Plus their music rocks. Simon Witter talks to ...