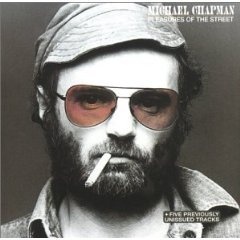 The Body In The Lake and Other Stories

SO THERE we were sitting in the studio drinking wine and talking rock and roll talk when Rick Kemp shouldered in, slammed the door and ...

ABOUT THE only thing that Michael Chapman has in common with Laura Nyro, apart from vast merit, is that a lot of people find the ...

IT'S TERRIBLE HOW people sometimes get the wrong idea, it really is. ...

Wine, One Woman And The Loony Yokel: A Tale of a Yorkshireman, Michael Chapman

MICHAEL CHAPMAN was revelling in the afterglow of Decca’s success with John Miles. The company had got really interested in promoting his new album, flown ...

ON THE REAR of the sleeve is a faded brown and sepia pic of Michael Chapman sat on a bed alone, nothing but a guitar ...

MICHAEL CHAPMAN is a ruminative sort of talent. ...