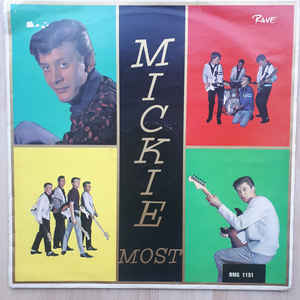 Newcomer to the Charts: Mickie Most Goes Right Back...

MICKIE MOST may be a newcomer to the NME Top 30 with 'Mr. Porter', but he's had one of the longest careers in beat music ...

AFTER A MINOR record success with his 'Mr. Porter', Mickey Most looks all set for a far bigger success with the follow-up 'The Feminine Look', ...

Right Then, Who's Backing Britain?

IF BRITAIN is going to the dogs, it is obvious a large section of the (older) community are convinced that sinful pop stars are prime ...

Mickie Most: Making Hit Records for the Government

ALAN WALSH TALKS TO MICKIE MOST, THE MAN BEHIND THE HIT MAKERS ...

Call Mickie Most 'The Hitmaker'

Mickey Mouse? What can I say about him? When making an album with the band laying down a track in the studio, Mickey is always ...

THERE HAVE been numerous record producers who have started their own label, including Phil Spector, Richard Perry, Tony Visconti and Nicky Chinn and Mike Chapman. ...

Mickie Most: The Rock of Ages

Mickie Most tells Mary Harron why in the world of pop the producer reigns supreme ...

The Midas Touch: Mickie Most

Profile by Steve Turner, The History of Rock, 1983

Record production made millions for Mickie Most ...

This is a transcript of Johnny's audio interview with Mickie. Hear the audio here. ...