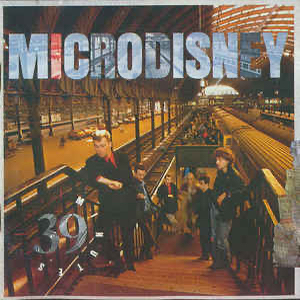 'Some of you (the Freemason pederasts) may be a trifle confused or even annoyed by the packaging and name of this record. For all your ...

Helen FitzGerald charts the dogged progress and gradual rise of the two misfits CATHAL COUGHLAN and SEAN O'HAGAN, better known as the heart of MICRODISNEY. ...

OR ... Camping It Up With The Cops, the Disney's third album, their first with a major label and the first to really wrap their ...

PLEASE EXCUSE my pretentiousness, but William Morris wrote in The Earthly Paradise: "Dreamer of dreams, born out of my time, why should I strive to ...

Microdisney: In From the Cold

Fed up with indie rigours and rituals, MICRODISNEY have signed to a major, but have they sold their souls? Helen Fitzgerald looks at a new ...

A CONTROLLED, tactical performance from an outfit carefully building up to an all out frontal assault. I give you warning: Microdisney are out to get ...

HAVING RECOVERED from Edward Barton screaming at us that he's got no chicken but he's got five wooden chairs, seeing Microdisney was yet another shock. ...

FRIDAY NIGHT. Time to take in a show. Support the arts and all that, old bean. Arriving early at the Dominion Theatre the singer from ...

THE VERY fact of this compilation's existence tells you a great deal about the music it contains, and the band it honours. The most recent ...