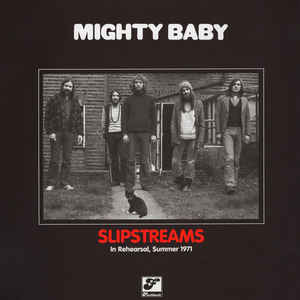 ROGER TELLS the story with the quiet resignation of someone who has been fucked about so much that it really doesn't matter any more. ...

MIGHTY BABY are unique In having, over a period of five years, transmuted from a good Moddy (Skinhead)?) soul/pop group into a brilliant electric contemporary ...

MIGHTY BABY comprises five young men who have been playing in various groups for a number of years and who have now combined to produce ...

Action Grow Into a Mighty Baby

IS THIS the career for you? Twenty pounds a week, uncertain prospects and no luncheon vouchers. The life of a rock drummer is not necessarily ...

TO REFUTE some of the idiotic ravings of national press reviewers, the Rolling Stones had no trouble stirring up the atmosphere at London's Saville Theatre ...

MIGHTY BABY have been around for an awful long time, and owing to contractual problems which have re­stricted their recording activities, they have very little ...

Mighty Baby: From Infancy To Adolescence

REMEMBER Mighty Baby? Got their records? If the name sounds familiar but you've never heard them, then you've missed out on easily one of the ...