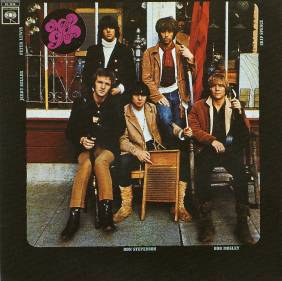 The early days in San Diego with the Misfits; being screwed by manager Matthew Katz; being ripped-off by Led Zeppelin; the problems with Skip Spence - the ups and downs of Bob Mosley.

Moby Grape: Aiming High Up On The Vine

THE MOBY Grape is a San Francisco rock quintet whose stated objective is to "climb high on the vine". They live in Mill Valley, California, ...

WHAT'S BIG, purple and swims in the ocean with harpoons stuck in its back? What has ten legs, long hair, some guitars and drums and ...

ABSOLUTELY FREE by the Mothers (Of Invention) must be heard to be believed and appreciated. The music is incredibly dynamic, the lyrics irresistibly memorable. ...

"AN ELECTRIC caterwauling of power... burning it, flashing it, whirling it down some arc of consciousness, the sound screaming up to a climax of vibrations ...

WHAT WAS Moby Grape? Some thought it was yet another hold-over from the battery of 'grape' jokes that sprang out of the American college pun ...

"I guess you could say our thing is a condemnation of everything that is false and deceitful in our society." — John Sinclair, of the ...

COINCIDING with their decision to reform comes this compilation of Moby Grape, not a greatest of hits but a personal faves number allotted to Bill ...

MOBY GRAPE BEGAN IN 1966, arguably the decade's peak; they fell apart in 1969, a time of madness, desolation, dread. Between the optimism of ‘Hey ...

THE BYRDS FORMED in 1964 when Jim (later Roger) McGuinn, a Dylan-obsessed folkie from San Francisco, saw A Hard Day's Night. He decided there and ...

"I'LL TELL YOU A GOOD ONE, a realy good one," says Jerry Miller, long-time guitarist with Moby Grape, warming to the subject of his former ...

Skip Spence and the Sad Saga of Moby Grape

Book Excerpt by Jeff Tamarkin, 'Got a Revolution', 2003

Great albums that fell off the critical radar: Moby Grape

THERE'S UNLUCKY and then there's unlucky. In the case of '60s Bay Area five-piece Moby Grape, they were hounded by the hex from Hell. They ...

YOU COULD SAY it was all there in the name: Melville’s white whale meets Dionysus, with suitably catastrophic results. But Californian quintet Moby Grape, the ...

"There was a definite shock value in hearing the Grape open up with a sound that you did not so much hear as feel in ...

You Had To Be There: Moby Grape's reunion show at The Fillmore East, June 1971

IT WAS THE middle of the afternoon, and four of us were sitting dead centre in the otherwise empty Fillmore East. Beside me was fellow ...

Frisco, Where Art Thou: Reassessing the Musical Legacy of the '60s Psychedelic Capital

LAST SATURDAY, paging through an article on Robert Plant in the September issue of MOJO, I learned that, upon their initial meeting in a Dublin ...

We need to talk about... Skip Spence: Oar in dark water