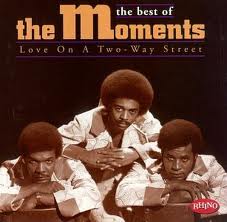 Moments with the Moments

OF ALL the stalwart American groups, the most hard done-by title surely goes to the Moments, three young men with a string of hits that ...

The Sylvers, The Whispers, The Moments: Apollo Theater

All Platinum Records: Behind The Scenes With Joe Robinson

JOE ROBINSON is President of All Platinum Records, a complex of record companies that embraces Stang, Vibration, Horoscope, Turbo and All Platinum labels. ...

Shirley & Company and The Moments: The Carpenters Are My Real Faves

All Platinum Records: A Few Moments With Shirley & Company

If 'All Platinum' appears an ambitious name for a record label, consider the fact that their first two UK releases, Shirley and Company's 'Shame Shame ...

The Moments and All Platinum Records: Moments To Remember

I'M SURE THE Moments will understand my meaning when I say that I am absolutely dumbfounded to be able to write a feature on them ...

The All Platinum Sound

The Chi-Lites: Half a Love and The Moments: Sharp

IF IT WERE ONLY for All Platinum's second certifiable classic – The Moments' 'Dolly My Love' – this group's new album would need to be ...

You can't keep the good guys down and the Moments have popped up again with their 'Jack In The Box' monster. They talk to B&S ...

The Moments Move Into the Bedroom ...

THE MOMENTS WERE the star act at All Platinum Records for over 10 years. Thanks to their European distributor Phonogram Records the label and indeed ...