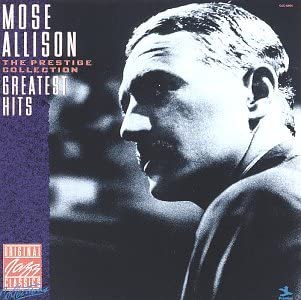 Mose Allison: A Chunk Of Indian Music In 'I Got Rhythm' Isn't A Jazz Influence

LONDON — MOSE ALLISON, Mississippi piano player now ending a two-week cabaret season at Annie's Room in London, is not quite the figure you expect ...

MOSE ALLISON and his work are both pretty well known by now to jazz and blues lovers over here. This album, to set down first ...

"BLUES IS A very limited thing to play. I have to keep adding things to it to keep it interesting. I keep striving for higher ...

SYREETA WRIGHT'S exhortations were built around Stevie Wonder, whose name was mentioned often and with reverence throughout the performance. Syreeta left no doubt that she ...

A Chat with Mose Allison

Where do you think your vocal style come from? ...

Mose Allison: Mose And His Muse

MOSE ALLISON can be summed up in two words – Mose Allison. ...

THE LEGENDARY British organ player Georgie Fame once described his hero Mose Allison as "the jazz version of Bob Dylan." When an interviewer asked Fame's ...