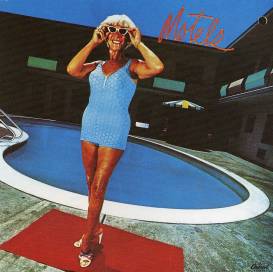 MOST LOCAL BANDS have drawn inspiration from the classic rock bands of the '60s – notably the Rolling Stones and the Who. The chief exception ...

IF YOU'RE a Motels fan don't get mad at me, just take it as an indication of the way interest has rapidly curved away from ...

LEONARD COHEN'S Death Of A Ladies' Man LP, his first and only collaborative effort with Phil Spector, was never really given its due as one ...

"ONE OF MY big dreams is to write music that communicates moods so concisely that each song would be like a movie — you could ...

The Motels: Checking In With The Motels

SHE'S HAD LOVE affairs and bands break up around her, and she has steered a course to a successful career by combining the tough pragmatism ...

BENEATH THE ENDLESS SUMMER CINEMATIC SCENES OF JEALOUSY & TRAGEDY OF SWEETNESS & DREAD ...

The Motels: Hell In A Handbag

STUCK IN a jam on the Hollywood Freeway, staring for five miles at a yellow Smiley bumper sticker telling me to have a nice day, ...

Take The El Out Of MOTELS And It's Motes

IN A SMOKE-FILLED cell up in Capitol Towers, that awesome Hollywood edifice modeled on an Ajax can, Martha Davis and Marty Jourard sit blinking under ...

Not Long Ago, But Far, Far Away: They Were There When L.A.'s Vital Club Scene Was Reborn

IT WAS 1976 and they were five newcomers in three bands. Together, they helped stage 'Radio Free Hollywood' and opened the door for hundreds of ...

The Dual Life Of Martha Davis