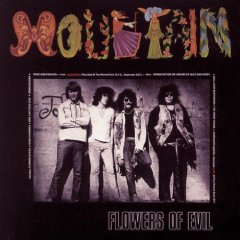 Mountain, a Rock Group, Rises From a Little Leftover Cream

A NEW ROCK group called Mountain may not entirely replace the late, honestly lamented British band Cream, but it is carrying on the tradition with ...

LESLIE WEST is a large American who sings a bit like a white Buddy Miles (or a black Terry Reld) and plays guitar just like ...

Mountain Is One Loud Mother

SAN FRANCISCO – When Mountain plays, the walls shake and the audience goes crazy. The band born in a recording studio when Felix Pappalardi produced ...

The Ascent Of Mountain

Profile and Interview by Caroline Boucher, Disc and Music Echo, 29 May 1971

Nantucket Sleighride. Whalers of sturdy New England stock hauled by their harpooned prey in salt-water acceleration. I happen to be a New Englander, but even ...

THE AMERICAN media has been hammering into people's heads that the solo singer/guitarist/songwriter is "in" and loud, exuberant rock is "out." But, the media forgot ...

WISHBONE ASH are without  a doubt one of our finest new bands — they make good albums, and their ever-increasing following is loyal. However, at ...

JEFF BECK has called him 'The greatest living guitarist in the World' and whatever you think of the American band Mountain there is no ignoring ...

"And the cold winds blow,He was brave but he's laid lowBy her body in the island mist,I saw him give her one last coldkiss...one last ...

Mountain: The Road Goes On Forever

MOUNTAIN, A BAND now departed for the great Fillmore in the Sky, was a standby whipping boy for practically any rock critic, regardless of taste. ...

FELIX PAPPALARDI, 43-year-old rock producer and musician, died from a gunshot wound in the neck early Sunday morning. He was allegedly shot by his wife, ...

Mountain Man Leslie West Once Had Houston at His Fingers

"YOU'RE IN HOUSTON, so let me ask you something," a gravelly, low voice asks on the other end of the phone. "Is the bed you're ...