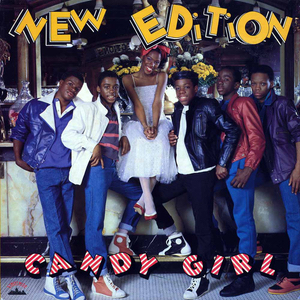 HERE'S SOMETHING that can't miss. Five young and cute boys (ages 14 and 15) who can sing and dance, including one outstanding lead singer whose ...

Profile and Interview by Dave Rimmer, Smash Hits, 26 May 1983

A YOUNG QUINTET FROM ROXBURY, BOSTON. DAVE RIMMER TAKES A LEAF FROM THEIR BOOK ...

We release New Edition on an unsuspecting London ...

NEW EDITION'S hit 'Candy Girl' is an uncanny re-creation of the early Jackson 5's pop-soul effervescence, down to the last vocal inflection. But it's not ...

Michael Jonzun: Pack Jammin' from Roxbury to the Top Ten

AT THE END of the street on the top of a hill in Roxbury is a two-story, weather-beaten wooden house. The first floor windows are ...

CHARLESTON — SINCE teenyboppers first screamed for Ricky Nelson and Frankie Avalon more than twenty-five years ago, pop music's teen idols have tended to be ...

Report and Interview by David A. Keeps, Smash Hits, 4 April 1985

THESE BOYS ARE BUSY. TWO YEARS AGO THEY WERE NUMBER ONE WITH 'CANDY GIRL'. NOW THEY'RE BACK WITH 'MR TELEPHONE MAN' AND 'COOL IT NOW', ...

Will the Jack of Swim be the next King of Soul? ...

Older, wiser and even smoother, Eighties teen sensations New Edition are back together. But this isn't just a nostalgia trip ...

New Edition: Houston? We Have No Problem

The Rolling Stones? Pah! The Beatles? Forget it! They're nothing compared to NEW EDITION (remember '80s classic 'Candy Girl'?). Or so founder member Bobby Brown ...

AWOL SINCE 1988, New Edition is back with a vengeance. With all members on board (yes, that includes bad boy Bobby Brown, as well as ...

A decade ago, New Edition were teenage, wildly successful and far from rich. The split, Bobby Brown married Whitney and checked into the Betty Ford ...