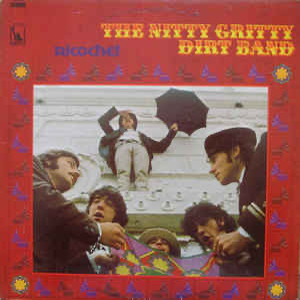 FOR several years, the Nitty Gritty Dirt Band has been a steady fixture in such local L.A. clubs as the Troubadour. ...

Nitty Gritty Dirt Band and Friends: Will The Circle Be Unbroken (United Artists)Dillards: Tribute To The American Duck (United Artists)Country Gazette: Don't Give Up Your ...

The Wit And Wisdom Of The Nitty Gritty Dirt Band

JUST WHAT THE hell is "good time music" supposed to mean? Is it John Sebastian lilting those fruity dry-hump ditties like 'You Didn't Have To ...

THE SEPTEMBER 13th 1975 edition of Billboard Magazine, the American music industry's Bible, carried an interesting and revealing supplement on Colorado – "a growing music ...

PLEASE TELL me, who is going to buy this peach of an album? It's a three record set, a compilation of the Los Angeles' band's ...

AFTER A bunch of friends, including a young Jackson Browne, figured that singing Bill Monroe and Mississippi John Hurt songs in the back of McCabe's ...

THIRTY YEARS BEFORE T-Bone Burnett gathered a bunch of excellent musicians in a Nashville studio to re-create early country music for the O Brother soundtrack, ...

Nitty Gritty Dirt Band: The Making Of Will The Circle Be Unbroken

AT THE START of the '70s, America was riven by conflict. Inter-racial strife, the Vietnam War and the emergence of a new, left-leaning youth culture, ...